How your business can take advantage of social media #2 – Twitter

Twitter has over 500million registered users, with over 200million of those defined as active, who are tweeting over 500million messages per day. A lot of these tweets are in the vein of micro-blogging, people sharing what is on their minds and chatting to friends who also have accounts. However, users are increasingly using the service to speak about brands and as a customer service tool.

A report from the end of 2013 revealed that ‘53% of customers who ask a brand a question on Twitter expect a response within one hour. However, if a customer makes a complaint to a brand using Twitter, that figure goes up to 72%’. Whilst that may seem unrealistic to some, this culture has been created by brands who are willing to go that extra mile on the platform and ensure that customer complaints and queries are answered quickly and efficiently. Lets take a look at some brands using Twitter to their advantage.

East Coast, who run a passenger service between London and Scotland, operate their Twitter account for 15 hours per day, seven days a week. They use their account primarily to answer customer queries, but compliment this with friendly messaging and competitions such as #viewfrommyseat which asks customers to tweet in images of their journey. The best images are entered into a competition on Facebook, where likes count for votes, and this results in promotion on that platform too.

The account replies to tweets every couple of minutes, and is a fantastic way of replying to customers comments. These range from ‘Why do @eastcoastuk charge double original fare to change ticket on peak train to earlier and quieter train?’ to ‘@eastcoastuk The lovely Sadie is serving First Class on my 13.35 to Leeds – always friendly and professional #happybunny’. Both of these tweets were responded to quickly, ensuring that both users receive the best possible customer service.

Users can tweet East Coast and get the information they need quickly. The alternative would be a phone call or email, which could take a lot longer.

Campaign Monitor is a fantastic tool which is used to create and send email newsletters. We have used it for a long time now and our clients love it. We have always experienced great customer service from them via email, but this has now extended to their Twitter profile.

Their profile is used to engage with customers and, more importantly, ensure that customers’ technical issues and queries are dealt with as swiftly as possible. This can range from suggestions from the actual Twitter account, to simply pointing users in the right direction for technical support on forums etc. It simply helps to keep customers happy and sending campaigns. 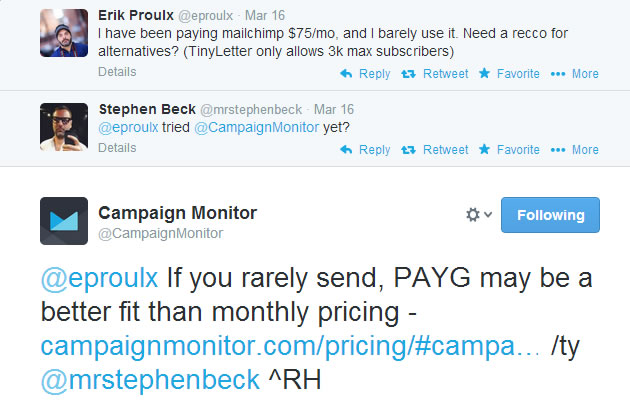 All of the tweets sent from the account are signed off with initials, and users on desktop machines can see who it is they are speaking to by checking the Twitter profile’s background image. This adds a level of personalisation to the service, and also allows users to potentially follow up queries knowing who they spoke to in the first instance.

The Namecheap account is a great example of a business who, in a competitive sector, can stand out from the crowd and drive sales via social media. After creating their profile in 2009 and running a domain competition, their followers jumped from 200 to over 4,000 in just one month. This led to a 20% increase in domain sales and has changed the way in which the company approaches social media.

Running competitions and promotions via Twitter can increase engagement and give users a reason to follow and monitor your account. Twitter recently launched promoted tweets, which ‘are regular Tweets but with the added bonus of reaching both current and potential followers you target’. This can help you reach new followers who may be relevant to your business.

Seen by some initially as a fad, Twitter has established itself as the number one way in which brands can keep in touch with customers. It requires a dedicated and honest approach, but the benefits can be increased brand loyalty, customer satisfaction and even sales.

You can read more about the social media services that Union Room provide by visiting our services page.