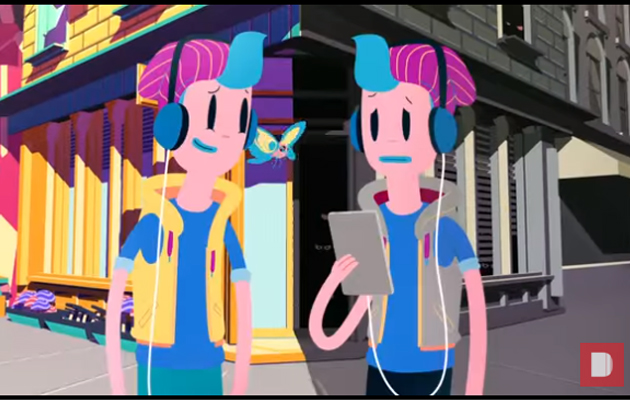 We like to keep an eye and an ear on what’s going on in the industry and it seems that Creative Content UK have had a productive old week. Backed by the government, they’ve been launching a new ad campaign that aims to encourage people to only use genuine, bona-fide sites and channels to stream and download content.

As a nationwide initiative of creative industries representatives and internet service providers, Creative Content UK are hoping this will help both reduce piracy and support creativity, spotlighting the idea that downloading from illegitimate sites kills creativity. As technologies continue to develop at a rapid rate, online copyright infringement is causing a growing concern and CCUK aim to tackle this by better informing consumers, beginning with this animation.

The story shows a character downloading his music and movies in the acceptable, legit way on a ‘genuine site’ and thus having a lovely time in a bright, vibrant, colourful world bursting with creativity, whilst the contrasting character goes about his day streaming illegitimately on a ‘dodgy site’, illegally consuming content. He must then watch as the advertising, shops, cinemas etc around him turn grey and empty. The plan is to demonstrate how illegal downloading harms the industry and how, by supporting and investing in creative, they can ensure that they’re enabling new content to continue to be produced. As Guy Bradbury, founding partner and executive creative director at Atomic London, said, “We’ve created a campaign that asks people to make a choice; whether they support the UK’s creative industries or not”.

The ad will run online (obvs) but also in cinemas, in print, radio ads and on TV, with the first screening being this Sunday afternoon on Sky Sports during the match and then again later, during the X Factor. If either of those programs are your Sunday viewing preference, then keep your eyes peeled.