What Is Google Wave?

The web community is awash with excitement at the latest ‘killer app’ to come out of the web industry behemoth Google. It’s named Google Wave and has been met with a very positive reaction from designers, developers and industry experts alike.

So what is Google Wave? Well, in it’s simplest form it can be described as a mix of e-mail, instant messaging and real-time collaboration tools in one simple browser-based application.

Google describe it as a ‘new tool for communication and collaboration on the web’ and it has been built by the engineering team over at Google, led by the brothers behind Google Maps, Lars and Jens Rasmussen.

Lars Rasmussen wrote on the official Google blog: “A wave is equal parts conversation and document, where people can communicate and work together with richly formatted text, photos, videos, maps, and more.”

“In Google Wave you create a wave and add people to it. Everyone on your wave can use richly formatted text, photos, gadgets, and even feeds from other sources on the web. They can insert a reply or edit the wave directly.”

“It’s concurrent rich-text editing, where you see on your screen nearly instantly what your fellow collaborators are typing in your wave.”

Google have described Wave as the answer to the question ‘if we invented email today, what would it look like?‘. 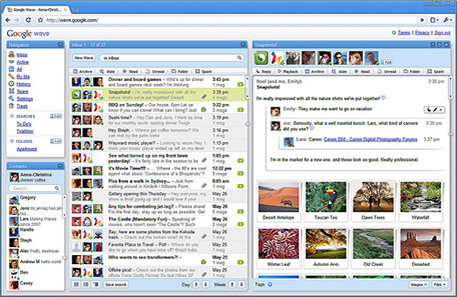 Google Wave is real time, mobile and social, three of the hottest trends in both Internet technology and engineering in the industry at the moment. Wave allows you to store personal content such as conversations, emails, twitter messages, pictures, video, documents and share this information with people and other social services through the use of developer-made tools.

Google Wave wants to change the way we use email in making it completely dynamic, allowing for the splitting, commenting, adding and editing of any ‘wave’ taking place.

Although only some of the tools featured in the application have been unveiled so far, and access is currently restricted to those developers who intend to create functionality for the tool, those features that have been announced have shown some remarkable advances on the current e-mail system as we know it. This includes the ability to:

The tool also contains a very advanced spell checking and link detection tool which can dynamically detect when you insert text intended to be links as well as already including Google Map, YouTube and Twitter functionality directly in the Wave.

Google Wave is due for release in the final quarter of this year but many are already expecting it to revolutionise the way many people and organisations communicate with one another.