Why the Times paywall is great for everyone

On Friday, the Times and Sunday Times announced that both websites would begin charging users for access to content from June. As expected, this has caused a bit of a stir on the likes of Twitter and it’s struck a chord with the design and development community especially.

The Times is one of the first high-profile websites to implement a paywall system and although the fee is a relatively small one (£1 a day or £2 for a weeks access to both sites), this hasn’t stopped a heap of criticism coming the way of the newspaper.

The move is undoubtedly one to help secure the long-term future of the company, with sales of some national newspapers down by over 50% from 200o to 2009 (the Times reported a decline of 21%) with Times Newspapers Limited losing a reported £240,000 a day alone. While it’s obvious that the website will lose a huge amount of passing traffic, or ‘window-shopping‘ according to Times editor James Harding, if only 5% of the websites current traffic converts to paid subscription, it will raise the paper over £1.8million a month. There has been no comment yet if the drop in reader numbers will affect advertising revenue. 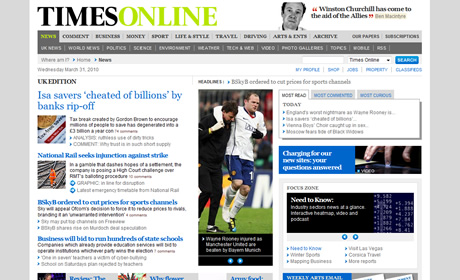 After a quite heated discussion in the office on Friday (nothing a round of tea didn’t solve, mind you), we decided to gather some opinions and make a blog post out of it.

“I think it’s a brave move, and one they’re clearly not doing without a lot of research and consideration. Apart from it being brave though, it also shows that they have a lot of confidence in their brand and the loyalty of their readership – they must think that the majority of their readership will pay, otherwise why risk it? It also makes me wonder what they’ve done with current advertisers on their site – if I were advertising and there was to be a barrier inserted between my investment and my exposure, I’d be watching very keenly to see how the introduction of the charge affects readership, so how have they tackled that. It will be really interesting to see what happens with other news sites too – will they follow suit and look to generate revenue up front, or will they hope to pick up readers deserting The Times and hope to generate revenue from advertising and other means due to a higher readership?”

“Personally, I’d never be willing to pay to read news stories that I can essentially find elsewhere on the internet. You could argue that you’re likely to be paying for a higher standard of journalism, however, I’m sure I could find just as high quality for free. There are plenty of alternative methods of income through means such as subtle, unobtrusive, relevant advertising placements that bypass the need to charge users for viewing content. Modern internet users tend to be savvy enough to find free alternatives for most sources of information and media these days so I can see the whole thing falling flat.”


“I have to say I disagree, whilst it seems fairly inexpensive a successful and popular newspaper such as the Times can easily charge a premium to place advertising on their pages and will be making a substantial profit this way. With the amount of free news available on the web it’s an easy option for people to vote with their feet and when the Times loses a significant amount of visitors it will put off other news providers charging for their online services which will mean there will always be free news available.”

“I think The Times are bold for being the first to (properly) introduce this – but do I think it’ll be a success? Not really. There have been numerous studies on the science of “free stuff” over the years, and they’ve all shown the same thing: An absolutely huge percentage of people will take something if it’s offered to them for free. Conversely only a tiny, tiny proportion of the same people would take that same item if it was offered to them for 50p.

As humans we are obsessed with the concept of “something for nothing” – when that magic formula disappears, so does our interest. Will there be value in the Times service? Probably. Will it be the next big thing? No.”

What’s my opinion? Well, I think the majority of people who read the Times every day will feel the charge is good value considering the quality of material published. It is however obvious that users who just use the site every now and again will just use another free service such as the Guardian and the BBC, but that’s not who the Times are targeting. As we’ve already mentioned, even if 5% of their user-base sign up, the paper will make over £1.8million per month which will surely go some way to ensuring the long term future of the company.

In my opinion, nobody is losing out. The people who don’t read the times often will continue to read similar content from elsewhere for free, the avid Times readers will pay £8 a month to continue reading high quality journalism from their favourite news website and the Times will hopefully make enough money to keep publishing newspapers and high quality content on their website.

What’s your opinion? Are the Times being greedy or are people expecting news for free being unrealistic?
Back to Blog